Makangwe is a township within Chilanga, a sma

Chilanga is known for its cement industry as Lafarge Cement Africa is based in Chilanga. Apart from this industrial giant, Chilanga is mainly a farming area and has become a residential area for people who want to escape from the hectic life in Lusaka.

In February 2011, two new classrooms, an office and a teacher’s house were completed at this rural community school.

The project took nine months to complete. It has allowed the school to offer 20 additional places and is still growing.

The school was opened with a spectacular ceremony on 15 February 2011. The whole community turned out for the event, including all the project trainees and local dignitaries.

The Ministry of Education has since confirmed a donation of 20 desks and is allocating two additional qualified teachers. Solar power has been fitted thanks to a donation from the Ellis Campbell Foundation.

We caught up with Head teacher Idah Muchinzi, who says the work has made a real difference.

We caught up with one of the trainees from Makangwe, Sabron Muchimba in our impact study ‘My life has changed, I don’t have a problem finding a job, especially with my certificate and recommendations’ he says. ‘I no longer struggle to pay for my children’s school fees, I am planning to put water and electricity in the house (sister’s) where am staying‘, he adds. 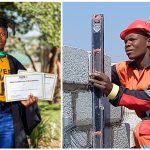